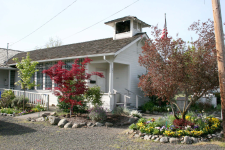 
The museum is available for tours for schools and special events. Please contact the city for more information at 541 826-4212.

Timeline of the History of Eagle Point

The Little Butte Creek area was settled by in the westward migration in 1852, the traditional lands of the Takelma people. Mills, commerce and schools followed soon as the Nichols, Mathews, Ashpole, Brown and other families established homesteads. Orchards were planted in 1900, and by 1907, rail service extended to Butte Falls. The town of Eagle Point was incorporated in 1911, Camp White was established in 1942 and dismantled in 1947. Highway 62 was paved in 1945, and tourism to the Upper Rogue and to Crater Lake increased. An interactive timeline of the history of Eagle Point is coming soon.

The City of Eagle Point is deeply committed to heritage preservation and respectful of its history and responsive to the community. In 2020, the City of Eagle Point, the Eagle Point Museum and key community members worked with Southern Oregon University to digitize important historic materials that tell the early stories of the town.  Journals dating from the settlement period, audiocassettes of oral history interviews from the 1980s and 1990s, architectural surveys, old VHS tapes and written recollections of earlier times were all converted to digital form and published to the web. These primary source materials tell the stories of everyday life in the city of Eagle Point through the years and are an invaluable record for the future. This project was funded in part by the Oregon Heritage Commission, National Endowment for the Humanities, the Library Services and Technology Act administered by the State Library of Oregon, and most recently by the Jackson County Cultural Coalition.